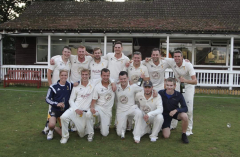 After a break of 2 years Holmesdale CC will be playing in the top division of the Kent Cricket League in 2020. After an excellent win against fellow title and promotion contenders Bromley, Luke Blackaby will lead the 1st XI back into the Premier Division. This is a huge achievement for a club of its size and one that is thoroughly deserved after narrowly missing out in 2018 The team was made up of 9 players who have come through the junior ranks at Holmesdale and its the success of our junior coaching and teams that has driven this achievement. More information about preparations for the 2020 will be included here when they become available.

Holmesdale CC qualified for the Kent Indoor Cricket Finals on 7th February at Canterbury where they played Hayes CC in the Quarter Finals. Despite scoring 96 in their 12 overs they were unable to restrict Hayes, who won with 4 balls to spare.

Holmesdale Cricket Club and star player Luke Blackaby were confirmed as runners-up in the Sevenoaks Chronicle Sports Awards in the Team of Year and the Sports Star of the Year. Both represent significant achievements for the club and for Luke. Well done all and well deserved.

The Holmesdale Cricket Club Annual Dinner took place at St Julian's Club in Sevenoaks. The black tie event saw players, friends and family come together to celebrate the unprecedented success of the 2015 season. For more photos of the evening please click here. A huge thank you to all those who attended and to those involved in organising the evening. Special thanks go to Sarah Sumner who organised the evening. 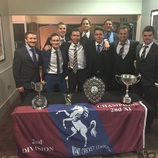 Holmesdale Cricket Club swept the awards at the Kent Cricket League Dinner on 15th November 2015. Captains Mark Epps and David East were joined by fellow players and members of the committee as they picked up the Division One First and Second Team trophies. To cap an excellent night for the club, returning star Luke Blackaby, also picked up the Kent League Cricketer of the Year for 2015. For more photos please click here. 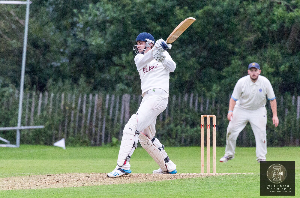 They have done it! Huge congratulations to Mark Epps and David East who have captained their sides to championships in the same season. For more photos please click here.